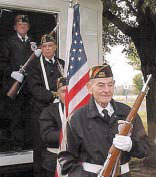 Tuesday, Friday, Thursday, Wednesday, Monday. That’s the order in which the squads were formed, one for each day, as new members were recruited to fill the ranks of the Memorial Rifle Squad at Ft. Snelling National Cemetery in Minneapolis.

On June 19, 1979, the Tuesday Squad conducted its first three funerals. Since then, members of the Memorial Rifle Squad have participated in nearly 42,000 services for veterans at Ft. Snelling. And their record is impeccable—the Rifle Squad has never missed a scheduled funeral despite Minnesota’s bone-chilling winter temperatures that dip to 25 degrees below zero and boast wind chills nearly double that.

There were six members on the Squad that first Tuesday in 1979, including George Weiss, who at 50 years old was the youngest member at the time. Today the ages range from 26 to 87 and the average is a spry 71.6. With a squad for each day of the week, the Memorial Rifle Squad is able to provide honors for up to 17 services a day. The Squad presents a rifle volley for each veteran, and every squad includes a bugler who plays taps.

On June 19, 2004, Weiss was on hand for a banquet commemorating the 25th anniversary of the Memorial Rifle Squad at The Prom Center in Oakdale, Minn. An audience of 350 crowded the banquet hall, including 100 active and 30 inactive members of the Squad. Under Secretary for Memorial Affairs Jack Nicholson presented the Secretary’s Award to Weiss in recognition of the Rifle Squad’s 25 years of dedicated service to the nation’s veterans. The state of Minnesota acknowledged the Rifle Squad’s accomplishments as Alberto Quintela, deputy secretary of state, read a proclamation from the governor.

Bob McCollum, cemetery director at Ft. Snelling, says he has never met a more dedicated group in his 22 years at VA. “What they do for our nation’s heroes, day in and day out, it doesn’t get any better. It’s an honor to work in the same facility with them.”

The Memorial Rifle Squad at Fort Snelling is the first and largest all-volunteer group of its kind within VA’s 120 national cemeteries. Every branch of the military is represented.

“There’s a little competition among the squads about who’s the best,” said Weiss. “We joke back and forth. But when we step out of the bus, we are in radio contact with the lead car. There is no talking in ranks and no horseplay.”

Weiss says the Squad performs its duties “with honor, pride and integrity.” Nicholson says he’d like to see this spirit and voluntarism spread to all national cemeteries.

Two of the youngest members of the Squad are reservists serving in Kosovo. “They come out once a week when they are in town,” says Weiss, “so we figure we’ll be around at least another 25 years.”